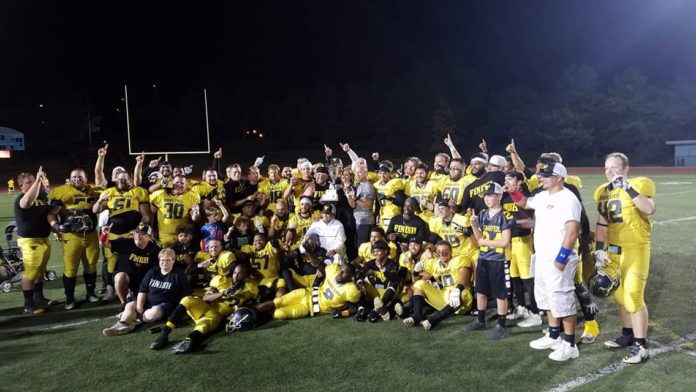 The Sioux City Stampede finished with an impressive 9-0 season winning the Midwest Football Alliance Championship. They played the Des Moines Blaze and beat them 43-12 in Omaha, NE at Ralston High School.

Both teams came prepared and were ready to battle it out but it was the Stampede who started the scoring and proved to be too much for Des Moines jumping out to a 14 point leading heading into the second quarter.

Des Moines would score to come within 8 points but the Stampede never let up and continued their dominate ways outscoring the Blaze in every quarter and shutting them out in the 4th to take the win and bring home the trophy.

The big difference in this game was the Stampede defense and they did not let up. They deflected a total of 8 passes and forced 7 interceptions returning one for a touchdown. They put their offense in great scoring position every time they took the field.

It was a huge team effort the entire season for the Stampede from the coaching staff, players, and even the community and they finally got what they have been working for. The Midwest Football Alliance Championship. Congrats Sioux City Stampede!!

Pearl Harbor – The Beginning of WWII

HometownShare Submissions - December 15, 2016
3
On December 7th 75 years ago the island of Oahu was shaken by bombs dropped unexpectedly from Japanese fighter pilots.  The men and women...