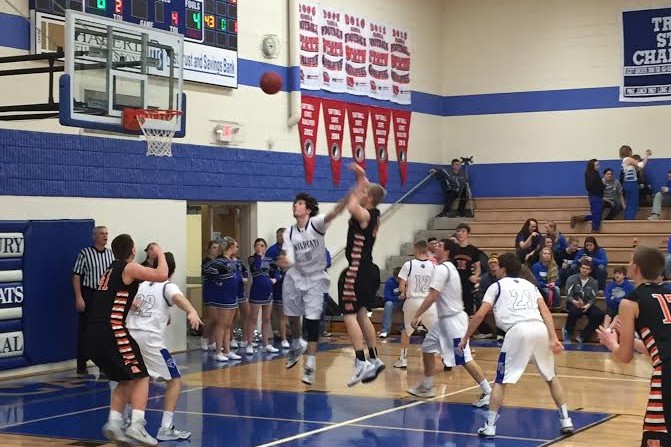 It was an exciting night for Warrior fans in Moville last Saturday, January 17th, as Sergeant Bluff-Luton dominated non-conference opponent, Woodbury Central. The Wildcats scored first, but SB-L quickly responded with 3-pointers from both Chris Kroll and Jacob Shultz, the first and second leading scorers for the night.

The game continued to be a flurry of threes, as both teams combined to drain seven 3-pointers in the 1st quarter alone. Kroll hit his third three of the night right at the buzzer to give the Warriors the lead heading into the 2nd quarter.

The SB-L boys were able to increase their lead as the game went on, scoring double their opponents points in the 2nd quarter.

Staying strong until the end, SB-L worked together to secure the win. Kroll and Shultz each had another 3-pointer, and Kroll hit his second buzzer beater of the night going into the final 8 minutes.

Kroll lead his team with 20 points and 6 steals. Shultz was close behind with 15 points, and Connor Prescott was the third Warrior to score in the double digits with 13 points.

The SB-L boys held their own on the road for the second night in a row and will now improve to 7-6 as they head into the second half of the season.

The Ballad of One-Eyed Red

Kenai Senior Writers - February 15, 2018
0
Old Red was a sockeye of modest means, Plodding his way toward his home, Struggling with siblings much larger than he, A runt, he was, and...