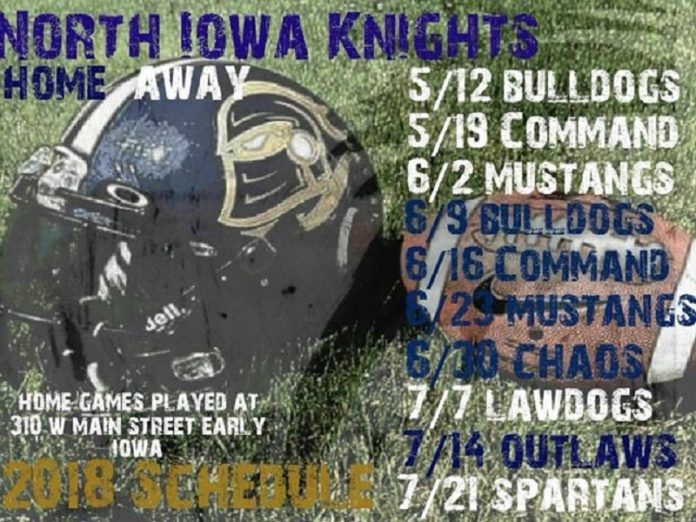 Your 2018 North Iowa Knight’s will not be the same team you saw exit the playoffs too soon in 2017.

Gone is QB Preston Peterson who holds most Knights QB records and was a multiple All-Star. Preston hung up the cleats after a nice run with the Knights to focus more time on his family, business and less hurt on the body.

Knights 1st year player, Lewis Russell (Estherville), is competing against returning back up QB Zach Ranck-Berns (Burlington) for the starting spot in 2018.

“The competition has been great and we will just have to wait until week one, it’s been that close.”

Also gone for the Knights is All-Star WR D.J Hocken who signed a Free Agent deal with league rival Capital City Command. Knights will get two chances at the Command this year in Des Moines on 5/19/18 & at home on 6/16/18.

The Knights look to replace Hocken with first year Knight, Isaac Riesselman (Carroll) & Cody Worden (Sioux City), as well as Trey Shoesmith (Carroll), who played part of the year for the Knights in 2017, and Chase Rann (Sioux City), are in the battle at WR.

Knights are also very pleased to add Dylan Hendricks (Gilmore City) back to the Starting O-line. Dylan played in part of 2 seasons for the Knights and always held his own, said Knights new Line Coach James Casey (Rockwell City) who retired this year after a long career with the Knights.

Also retiring after the 2017 season was RJ Higgins (Badger) LB/FB/QB, who helped start the Knights. Higgins called it a career to deal with nagging injuries.

Knights will miss Higgins’ leadership and hope some new blood on defense can help that.

Knights play their first game on 5/12/18 @ Northwest Iowa Bulldogs in Aurelia, Kick-Off at 7pm. This is sure to be a great game full of hard hits.

First home game, 6/9/18, also against the rival Northwest Iowa Bulldogs, will be played in the Knights new hometown, Early, Iowa with a 7pm Kick-Off.

Like the North Iowa Knights on Facebook or go to www.htosports.com/northiowaknigts for all your Knights news and ticket Information.

Knight’s football is fan friendly and we invite everybody to come out and help root your North Iowa Knights On To Victory.

Written by Ryan Schmidt-Voice of the Knights. 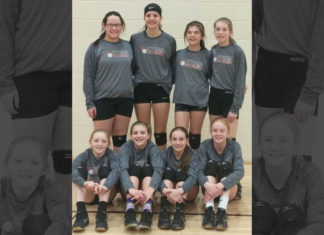