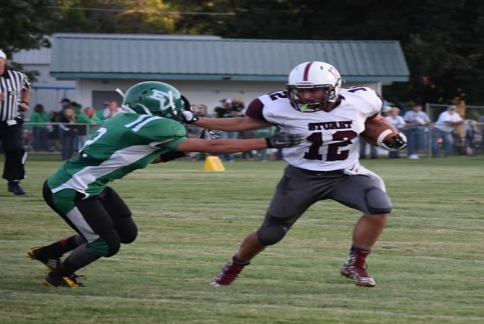 It’s not how you start, it’s how you finish. The Broncos have learned how to play in the clutch. Trailing in the 4th quarter and coming back to win is something that has started to become the norm for the 2015 Broncos. The Broncos continue to compete despite being undersized and inexperienced. The Elkhorn Valley Falcons gave Stuart all they wanted in this one. The Falcons won most of the second half, but a late Bronco comeback doomed them. Let’s get to the details.

The Broncos started slow once again as Elkhorn Valley opened up the game with an easy touchdown by talented running back Noah Rutjens to give the Falcons an early 8-0 lead. The Broncos quickly countered as the Broncos pounded in a touchdown on the ground to tie the score up at 8 heading into the second quarter. Miscommunication and the inability to set the edge halted the Bronco running game for most of the game. A veteran defensive line for the Falcons continued to disrupt the young Stuart offensive line. The second quarter proved to be another deadlock. Bronco linebackers Micah Dexter and Andrew Olson made quite a few plays to hold back the Falcon offense. Tate Schmaderer provided 2 first half interceptions at defensive back, but the Falcons managed to get a quick score and lead 15 to 8. With a minute left in the second quarter, the Bronco offense found their stride through the air. A deep pass to receiver Trey Thornburg put the Broncos in great position for an easy score. A 4th down conversion helped the Broncos jump a head 16 to 15 by the half. A great game was in the making.

The third quarter was owned by the Falcons. Turnovers, bad tackling, and an inept running game stopped the Broncos from doing anything on offense. Elkhorn Valley flew high and torched the Broncos for 2 touchdowns to take a 29 to 16 lead heading into the final stanza. The first half of the 4th quarter proved to be same story for the Broncos. A fumble with 5 minutes remaining in the game by quarterback Tate Schmaderer put a stop to a great drive. All hope seemed lost at this point. A quick punt by the Falcons put a little spark into the Stuart offense as Schmaderer quickly found senior Conner Paxton for a big gain. Another touchdown to Micah Dexter gave the Broncos a little hope as they cut the deficit to 7 at 29-22. A second quick halt by the Bronco defense caused a Falcon punt. The Broncos had the ball back with 2 minutes to go and the game was on the line.

Calm, cool and collective. Coach Dexter Goodner wasn’t worried. His kids have handled this before. He just had to call the right plays and the Broncos could sneak home with another victory. Schmaderer quickly hooked up with Dexter for a 10 yard gain and they slipped into Falcon territory. A scramble play for the Broncos was successful as Schmaderer hooked up with Thornburg for a deep touchdown and the Broncos were within 1! 29-28 with the two-point conversion pending. Only 49 seconds remained as the Bronco offense broke the huddle. Victory was only 3 yards away. Never had such a small yardage seemed so far away. The Broncos snapped the ball and Schmaderer dropped back and broke a couple tackles to find a diving Paxton for the game winning score. The play appeared on popular sports film site, Hudl, for the great catch. The defense powered up again and stopped the Falcons for a decisive road win. The Broncos snuck away with a 30-29 win and will try to defeat #6 Sandhills-Thedford next week during a Saturday Night Special.