The Capital City Command and the Des Moines Blaze suddenly have a lot in common.

They share similar records and both teams are coming off of championship game appearances in 2017, where they both fell short.

For the Command’s part, 2017 was the year that put them on the map.

In their third season since jumping from 8-man to 11-man football, a 5-3 overall record saw them run off five straight wins after starting slow.

Des Moines won their playoff spot in the final week of the regular season before upsetting the heavily favored Kansas City Bulldogs, in Kansas City, to earn their championship bid.

With their five league championships and two national titles in their eight-year history, the Blaze is definitely seen as the big brother of the semi-pro scene in Des Moines.

But as the Blaze rebuild a team that once went four straight seasons without losing a contest, the Command field their most talented team to date.

With the crosstown rivalry and a full off-season to focus on the non-league opener that may mean nothing in either league’s standings, but everything to the players and fans who’ve grown up together.

There is the possibility of something epic going down on this field.

It will be strength on strength as Jamere Murphy leads the high-octane Command offense against a Defense that boasts many holdovers from the Blaze’s glory days. 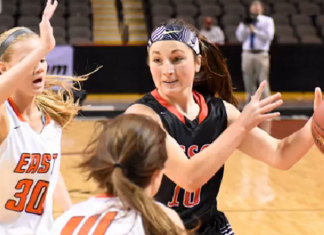 HometownShare Submissions - January 14, 2016
1
The Lady Cardinals basketball team is proving they are still the team to beat in the Siouxland area with big wins against Sioux City...