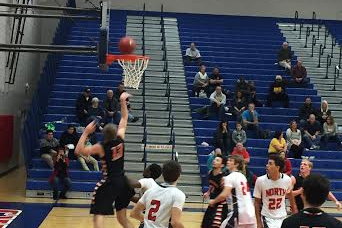 After a scoreless opening three minutes in their game at Sioux City North on Saturday, the SB-L boys kept it interesting until the final buzzer.

The big plays in the first quarter started with Jackson Wright being fouled on a made shot and swishing the free throw, followed by Chris Kroll draining a 3-pointer and Keegan Savary swiping one of his four steals for the night, fighting for the layup, and later swishing a three as well.

Wright, Kroll, and Savary, along with Andrew Christensen, all scored in the double digits against the Stars. Kroll led the team with 19 points, but Savary was close behind, scoring 18 points plus 7 rebounds. Christensen had 13 points and 6 boards. Wright was the only Warrior with a double-double, scoring 10 points and grabbing 11 rebounds.

Also stepping up for Sergeant Bluff were Jacob Shultz with 7 points and Connor Prescott with 4 points and 4 big assists for the night.

North kept the ballgame close with a few 3-pointers before the half and a couple more coming out of the locker room, to make it 30 all. The Warriors were in it to win it, though, as Savary hit a three to regain the lead.

Late in the fourth quarter, the Stars battled back and shrunk SB-L’s lead down to just 3. But the Warriors did not crack under pressure and were able to make plays when it counted most. They came home with the “W”, final score: 71-66. 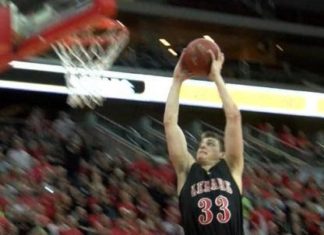 HometownShare Submissions - March 13, 2015
0
The Le Mars Bulldogs needed a big game from there big player and Tyler Borchers answered the call.  He scored 35 points and had...