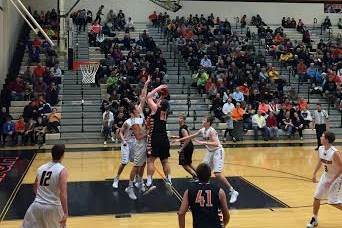 The SB-L boys started off hot when they took on the Black Raiders at East High on Friday night. The Warriors won the tip and put up the first points. Chris Kroll soon extended the lead with a 3-pointer and Jacob Shultz followed with a three of his own.

Sergeant Bluff’s first 12 points went unanswered, but as the Raiders finally got one to go in, Shultz was quick to hit another three and steal the ball to drive for two more.

Into the second quarter, East got within one point of the Warriors before Shultz drained yet another 3-pointer. Later, with the black and orange tied up at 29, Kroll hit his second three of the night to retake the lead for SB-L.

East charged ahead before halftime, the score 39-32 going in to the locker room. All of Sergeant Bluff’s points in the first half were put up by Shultz and Kroll, the leading Warrior scorers this game. Shultz ended the night with 28 points, and Kroll had 16.

Andrew Christensen started off the second half with a bucket for SB-L. He was the leading rebounder for the Warriors with 8 boards in addition to 8 points on the night.

After East hit a 3-pointer, Shultz responded with this fourth and final three of the game and passed the baton to Savary who would also score four 3-pointers, racking up 12 total points versus the Raiders plus 6 valuable assists.

Although they gave it their all, SB-L did not come home with the win. East pulled ahead in the last few minutes to defeat the Warriors 79-71. The black and orange will battle it out again on January 29th in Sergeant Bluff. 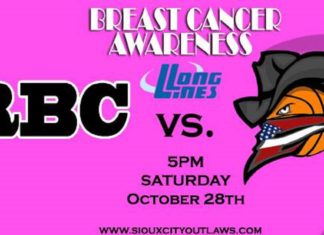 HometownShare Submissions - October 30, 2017
0
The Outlaws evened their record for the weekend at 1-1 as they beat the Great Plains Bison in Winnebago 96-76 after falling to Team...

Who Wants To Remember?