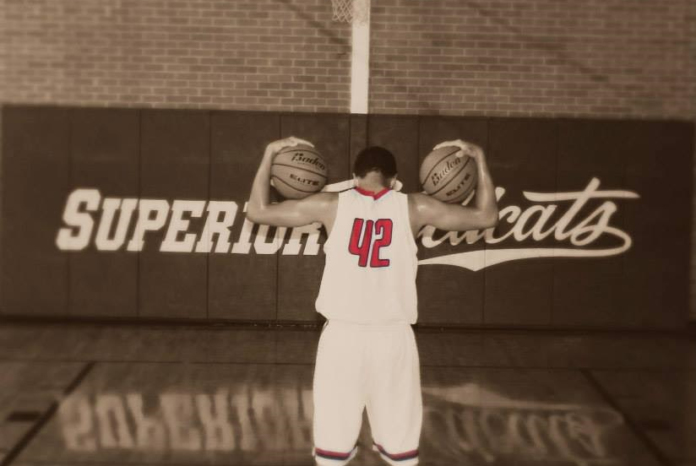 The skills of dunking and the power to block shots describes a 6’5” junior located at Superior High School. He goes by the name Ethan. Ethan Roberts, 16, son of Tim and Melissa Roberts, is noticed as a star athlete in the skill of basketball. With his height, Roberts averages around 20 points per game or more. The 20 points that Ethan shoots come from right and left-handed layups and bank shots. His weakest spot to shoot on the court is located at the free throw line. In Ethan’s own words, he states, “I can’t make a free throw to save my life, but I still try.” As a junior in high school and brother of three, Ethan is able to prove to his coaches, team and family that no matter how terrible you are at a sport and/or activity, as long as you keep trying you will succeed. It just “takes a lot of time and practice,” Ethan said. In addition to being a junior, Roberts has to start thinking about his future plans. Roberts said, “Every day I practice, I make sure I give it my all 110%.” From practice on the courts, to the big games, Ethan performs all his hard work the night of the games to get recognized by college representatives.

On the nights of the games, Roberts does not always do his best, due to massive distractions. Distractions can occur anywhere at anytime and just by losing one’s train of thought. Several of Ethan’s foolish mistakes are caused by the giant springing up into the air, throwing his arms over the ball, allowing the opponent a free shot at the free throw line. When Roberts errors with a foul, the head coach Mr. Chadwell yells and screams at Ethan to get his head into the game. From Chadwell barking at Ethan makes him realize that he has done something wrong, and he needs to fix the situation. After Chadwell removes him from the game to encourage him, Robert’s mind slowly starts to regenerate back into gaming mode. Ethan has noticed from practice and games, with Coach Chadwell working on him, he has become a more motivated athlete. Roberts also feels the need to thank his coach because if he wouldn’t have gotten barked at, he would have never been the athlete he stands as today. 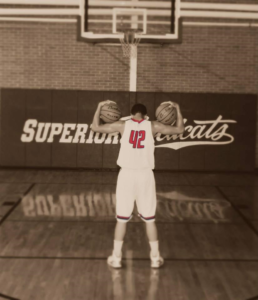 The summer of 2014, Roberts had attended a very expensive basketball camp located in Lincoln, Nebraska. During the four-day camp, Ethan learned various different types of basketball plays, including how to successfully block and shoot. During the camp sessions they also scrimmaged against other teams, where as a 6’5” junior, Ethan successfully dunked the ball. After winning the game, Roberts felt the adrenaline rush from his first experience of dunking a ball right before the buzzer, which is also known as a “buzzer beater.”

Whenever he had confided to his parents that basketball may be something for which he would like to attend college, both Tim and Melissa were ecstatic to hear that from him. They were, however, very upset knowing the fact that their baby boy was growing up, but the worst part is it will be outrageously expensive.

Roberts’ future plans are to major in mechanical design and/or constructional design. Ethan has stated, “I would like to receive a scholarship for basketball to attend a Nebraska college, so I could partake in the NBA, but if I do not get accepted into a Nebraska college for basketball, I will not participate in college ball. I will just focus on my majors.”Around late June early July of 2014, a friend of Ethan’s had been working, and out of the ordinary, a well-dressed man came up to her with some questions about the 6’5” junior at Superior High School. She was so confused, until the man had handed over a thin, white card with “Doane College Recruiting” spelled out on the very top. Later, when school started she proceeded to tell Ethan the news. He was so excited he couldn’t stop talking and thinking about it. As he came home to tell his whole family the exciting news. One by one, each adults’ eyes filled with joyful tears. A word came from his mother, “ I am so proud of you, Bud, but don’t get your hopes up.” Ethan told his mother that he knows not to get his hopes up because being a star athlete may or may not come true.

Since that time Ethan continues to focus on the basic sport of basketball. Roberts and his family still wonder if Doane might consider a full scholarship to Ethan, but still not getting too worked up about it. Ethan runs a mile every morning for the preparation of

“the best sport in the world,” Ethan quoted.

Roberts still has to focus on his high school educational work. Passing all his classes, with some help from his aunt gives Ethan enough time to play other sports besides basketball. At Ethan’s games, he admires the sound of his family’s screaming chants, but he also appreciates the proven fact that his aunt would take the time off work, just to photograph his professional abilities in basketball. With a 6’5” junior star basketball athlete, and a camera, starts the future for a very happy man to pursue his dream goal at basketball. 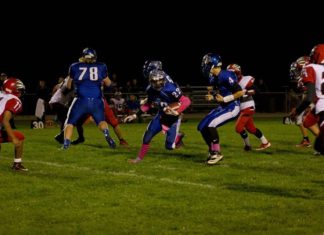 Colton Spaur - October 10, 2016
3
From the opening whistle, it was all blue and white. Last season’s fourth quarter collapse against the Warriors was avenged Friday night as the Sabers...