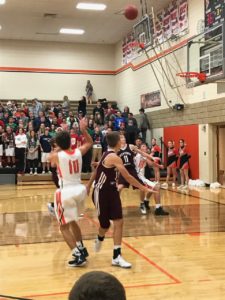 The Warriors gave the Hull Western Christian Wolfpack quite a fight when the second-ranked team in the state played in Sergeant Bluff last Tuesday night.

Leading-scorer Jackson Wright started off the Warriors with two points on their first possession. Wright ended the night with 17 points. He tied for the most rebounds with Collin Croston at 8.

After the strong start by Wright, Western Christian drained a three, but Connor Groves quickly responded with a long SB-L three-pointer. After trading a few more long shots with the Wolfpack, Groves ended the night with 11 total points. He was the second Warrior to score in double-digits. Chris Kroll was the third with 10 points.

Keegan Savary was right behind with 9 points, including a three-pointer. Savary also contributed a notable 7 assists.

The teams traded buckets throughout the night. Hull was ahead 14-23 at the end of the first quarter.

“We gotta catch our rhythm,”

Head Coach Adam Vander Schaaf told his team as they headed into the second quarter. And they seemed to do just that, holding the Wolfpack to only three points to make it a one-point game at the half. 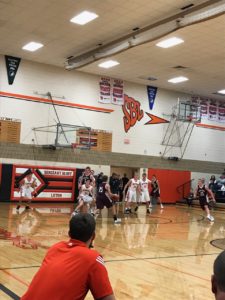 The Warriors started the third with a 9-0 scoring streak to pull ahead right out of the locker room. They stayed neck-and-neck until Hull hit a three right at the third quarter buzzer to regain the lead.

Coach Vander Schaaf instructed the guys as they tied the score at 44, 46, and 48. SB-L hit a number of crucial shots to stay close until the absolute last second. However, Western Christian landed on top when the final buzzer sounded, 56-57 The Warriors will start out the New Year at Woodbury Central on Monday, Jan. 2nd. 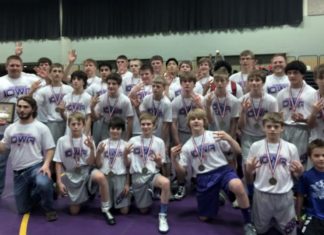