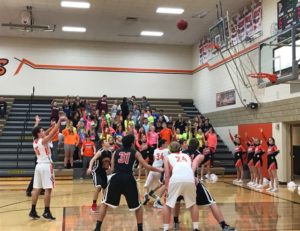 Connor Groves gave SB-L a ten-nothing lead just minutes into the game with two three-pointers. Groves was one of six Warriors to drain a three that night. The other sharp shooters included Cole Salker, Sam DeMoss, Colby Laughlin, Dylan Laughlin, and Britton Delperdang.

Groves was the leading scorer of the night with 15 total points from his five three-pointers. Collin Croston, and Chris Kroll were next on the charts with 11 points each. 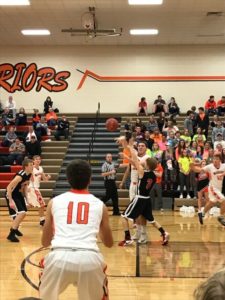 Assistant Coach Kyle Nikkel urged the guys to get it done “right from the start” and they surely did, outscoring the Cardinals 24-2 in the first quarter. The team’s balance was evident early in the game as six guys had points on the board in those first eight minutes.

South Sioux tried to put on the pressure in the second half, but the Warriors didn’t let it get to them. They remained sharp and steady as they shared the ball and supported each other. 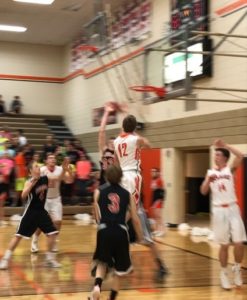 In the third quarter, Jackson Wright and Keegan Savary each put in the “and one” for three-point plays. Wright was the leading Warrior rebounder this game with 11 boards.

The balanced stats proved that the name of this game was definitely teamwork. Rebounds and assists were evenly distributed throughout the roster, and by the final buzzer, every member of the team had put up points.

This game was a testament to the hard work that each member of the team gives at every practice and every game. The Warriors hope to continue showing that hard work in the post-season as they travel to Spirit Lake to take on the Algona Bulldogs this Monday night at 6:30. 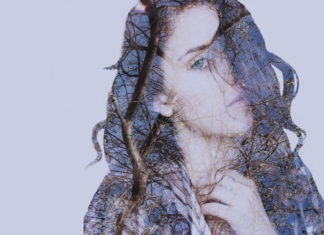