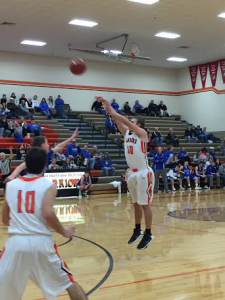 The Warriors were ready to play ball Monday night, January 4th, when Woodbury Central came to town. SB-L shut out the Wildcats in the first quarter, 20-0.

Leading scorer Chris Kroll contributed to this fantastic start with a steal to Jacob Shultz for 2, a 3-pointer, and a layup off a steal from Shultz. Kroll ended the game with 17 total points.

SB-L was just as powerful in the second quarter with threes from Keegan Savary and Kroll again. Woodbury Central tried regrouping after being outscored by 24 in the first half, coming out with two 3-pointers, but the Warriors were on top of their game. Shultz, Kroll, and Colby Laughlin all responded with threes as Adam Kascht hit two 3-pointers of his own.

Kascht was right behind Kroll with 16 points on the night, and Shultz was the third Warrior in the double digits this game, scoring 10 points.

To finish it off, Kascht swished a layup right at the buzzer to give SB-L the 74-25 victory.

All of the Sergeant Bluff boys contributed to this big win, including top rebounder Jackson Wright and Connor Prescott who had 6 assists. 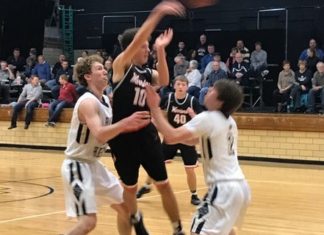 Lyndi Kiple - February 13, 2017
5
SB-L squared off against the Crusaders at Bishop Heelan on Saturday in an aggressive battle. The Warriors trailed early in the first quarter but...

Riding To The Hoop