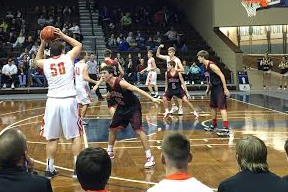 An extraordinary venue called for an extraordinary game and the Warriors delivered. SB-L travelled to Sioux Falls on Saturday to take on the Bulldogs of Le Mars as part of the Sanford Pentagon Classic.

It was an exciting battle from the start as Le Mars started with a 3-pointer. Fired up, Jacob Shultz hit a couple threes to help the Warriors grab the early lead, 22-9, in the first quarter.

The Bulldogs came back in the second with another 3-pointer sparking a quick 12-0 run to make it just a 1-point ballgame. SB-L gained back a smaller lead going into halftime thanks to more threes from Shultz who accumulated 20 points in the first half alone. Shultz was the leading scorer for the night and one of four Warriors in double digits. He had 24 total points with an incredible 75% accuracy rate from the field.

Despite two three-point plays from Keegan Savary, SB-L was down by one heading into the fourth quarter but all the guys stepped up their game to fight for the win. Jackson Wright got the “and 1” to tie it up but Le Mars continued to keep it close. Chris Kroll, Connor Prescott and Savary each hit 3-pointers to help Sergeant Bluff pull ahead in the last few minutes.

Wright, Kroll and Savary were the three other Warriors scoring double digits this game with 16, 11 and 10 points respectively. Wright was the only SB-L player with a double-double though, also contributing 11 rebounds.

Up by three with 20 seconds left the guys played their best defense to hold out for the victory 68-63. It was a fun night for players and fans alike as the Warriors picked up the “W” at the impressive Sanford Pentagon.

SB-L will finish out their season with road games at Denison, Council Bluffs and South Sioux City looking to maintain their winning record (10-7).