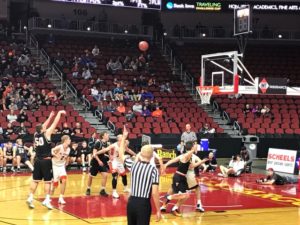 The SB-L boys were back for more fun in Des Moines as they took on undefeated West Delaware-Manchester in the State 3A Semi-Finals on Thursday. The West Delaware Hawks scored first, but Chris Kroll responded by knocking down a three-pointer for the Warriors.

Kroll was the leading scorer for the night with a career-high 32 points this game. He also topped the charts with 10 rebounds, 6 assists, and 3 steals.

After another fast start, SB-L was up 15-10 after the first eight minutes. Sophomore Connor Groves started the second quarter with another Warrior three. The Hawks tried to keep up with two three-pointers of their own, but SB-L turned around and scored with three consecutive three-point plays from Kroll and Keegan Savary. 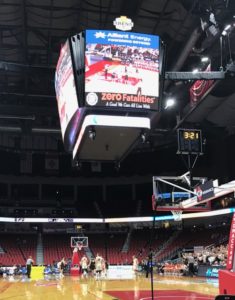 At the half, the Warriors held a comfortable 10-point lead. With a couple more threes from Groves and some second-chance points from Jackson Wright, SB-L was steady throughout the second half. Wright was the second-leading Warrior scorer for the night with 17 total points.

The team displayed their trademark hustle and used their stellar teamwork to upset West Delaware-Manchester, 72-59. That victory punched SB-L’s ticket to the state championship for the first time in school history.

Head Coach Adam Vander Schaaf summed it up perfectly in his post-game press conference interview, “It’s a special time for us right now.” The excitement and passion the guys consistently play with makes that absolutely evident. 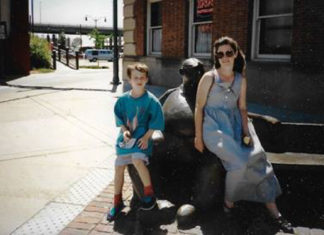 Barbara Carlson - October 5, 2017
0
Bronzed in the foundry, The Watchful Citizen sits in the sun at an intersection in the Haymarket District, Lincoln, NE. He's relaxed and welcomes passers-by to...