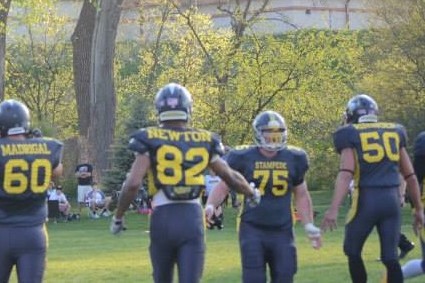 The Sioux City Stampede play the Quad City Wolfpack this Saturday at Leeds Field at 7 PM.  The Stampede are 2-0 on the season after beating Sioux Falls Stallions 51-12 in their opening game and then rolled past the Lincoln Renegades last weekend at home 77-0.

Last weekends game against the Renegades the Stampede had proof that their offseason moves towards improving their defense was successful when the defense had 33 tackles and 20 of them for a loss.  They also had five sacks, three fumble recoveries, one safety and two interceptions.  Derek Geddings led the way with five tackles, one sack and two forced fumbles recovering one of them and Devin Groenhagen had four tackles, two sacks and a force fumble followed by Brad Stapleton who had four tackles and one sack.  (pictured left is Derek Geddings attempting to block a punt)

Their offense was just as impressive with 10 different receivers gaining stats and eight players having double digits in yardage plus four different receivers making the end zone.  The Stampede’s rushing was also spread out with seven different rushers seeing downs.  Rushing was led by Aaron Girard who had 157 yards and three touchdowns.  Blake Sappingfield rushed for 49 yards and also had three touchdowns.  Both starting quarterback Jose Laureano and backup Scott Manley saw playing time with both completing 8 passes for a total of 209 yards and four touchdowns.  The Stampedes kicker, Doug Lehman, also had a great game going seven for eight in extra point attempts.

Head out to Leeds Field this Saturday at 7 PM to cheer on these Siouxland Athletes!! 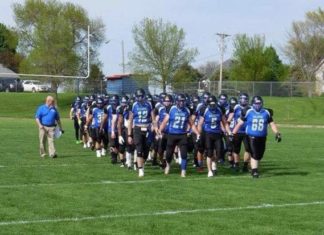 HometownShare Submissions - May 13, 2015
0
The Northwest Iowa Bulldogs win game two of their inaugural season against the Council Bluffs Spartans.  It was after a tough loss last weekend...