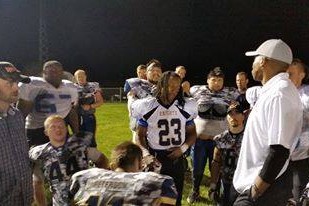 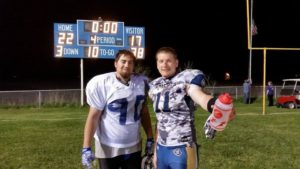 The North Iowa Knights defeated the Northwest Iowa Bulldogs 22-17 last Saturday in a week one matchup in the Midwest Football Alliance.  The first two quarters were full of offense and the last two were full of defense for both teams.

The North Iowa Knights were led by quarterback Preston Peterson who completed 15 of 27 passes for 264 yards and two touchdowns. Preston connected with six different receivers to spread the ball and was led by Justin Anderson who had six catches for 70 yards.  Darius Gilmore of the Knights caught 3 passes for 63 yards and a touchdown and Ray Parker had a 67 yard touchdown reception.  The Knights rushed for 102 yards on the day with QB Preston Peterson rushing 58 yards on 13 attempts and one touchdown and Justin Anderson ran for 43 yards on nine attempts.

Heading into half time the score was 22-17 with the Knights in the lead.  Second year coach Raun Taylor looked to make only a couple adjustments but continue to stick to the plan he put in place for the team.  The Knights defense was a solid collective effort by all players.  Mike Neal had two of the team’s three interceptions while Steve Erdmann had the other.  They were led in tackles by Gabe Washington with six solo and four assisted tackles and a forced fumble followed by James Larrabee who had five solo and three assisted tackles.  Rounding out the very strong defensive effort was Curtis Peterson and Jordan Strickland with a sack each and DJ Erkenbrack with two fumble recoveries and four and a half tackles. 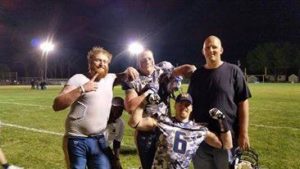 The second half proved to be all defense for both teams with the Knights and the Northwest Iowa Bulldogs defense both pitching a shut out and the Knights holding onto the 22-17 victory.

The North Iowa Knights have a BYE week this weekend and will play the Quad City Wolf Pack Saturday May 16th in Pomeroy on Knights field with a 6pm kick off.  GM/Player RJ Higgins said, “We are looking to pack Knights field again.  Attendance was great at the first game and we really want to thank the fans.”  Find all of your Knights and Midwest Football Alliance news at Midwest Football Alliance.

Get out there and support these Siouxland Athletes next weekend in Pomeroy, IA 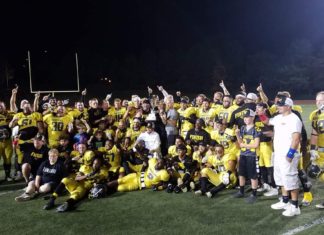 The Sioux City Stampede Did It

The Sioux Falls Skyforce Is Fun To Watch