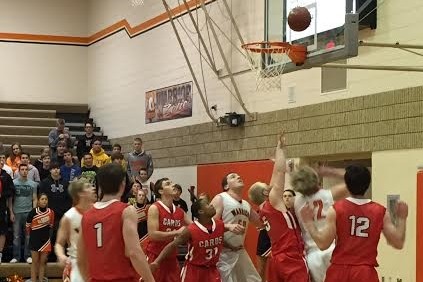 The Warriors did their best to keep up with non-conference opponent South Sioux City last Thursday, Feb. 19th, but could not pull out the win. Nonetheless, SB-L played a fast-pace offense studded with some incredible showcases of athleticism throughout the game.

It started out when Andrew Christensen barely saved the ball from going out of bounds and managed to get it to fellow Warrior, Connor Prescott, who assisted Christensen on the other end of the court as he went up for an easy two points.

Christensen had another shining moment in the second quarter when he was fouled on a made shot and then swished the free throw, turning it into a three-point play for SB-L. He later did the exact same thing again.

After being down by 10 at the end of the first quarter, the Warriors worked hard to cut the SSC lead in half by halftime.

They did more than just “keep playing” in the fourth quarter. After the Cardinals sunk three 3- pointers, the pressure forced SB-L to kick it up a notch. First Jacob Shultz got a 2+1 with the foul on a made shot to put the Warriors within just two points of SSC. Kroll then used his signature stop-piggyback move to force the foul and swish the bonus free throws. Next, Shultz and Kroll both hit 3-pointers, and to top it all off, Prescott drained a three right at the buzzer. Even though they gave it all they had in the final quarter, it ended up being too little, too late.

Still, the Warriors ended their regular season at home with an admirable performance. Kroll topped the charts, scoring 18 points. Shultz was close behind with 11. Christensen and Wright each had 10 points and 7 rebounds, while Keegan Savary led the team with 8 boards plus 6 points.

Heading into post-season play, SB-L maintained their winning record of 11-10. 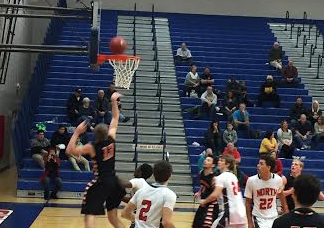 Lyndi Kiple - December 8, 2015
0
After a scoreless opening three minutes in their game at Sioux City North on Saturday, the SB-L boys kept it interesting until the final...