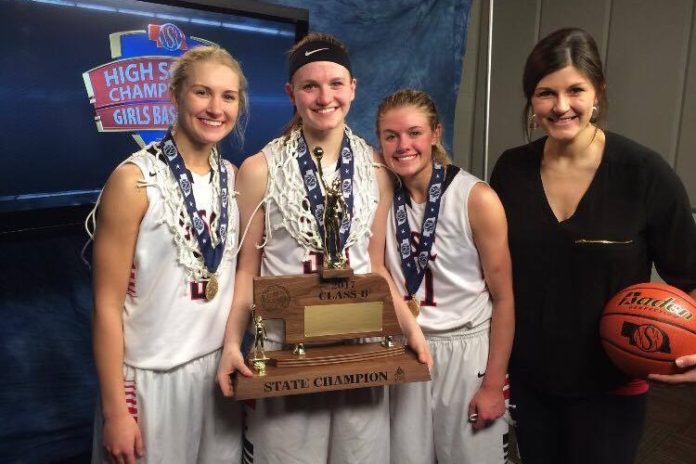 The Lady Cardinals of South Sioux City, Nebraska competed at the Class B Girls State Basketball Championship. With five seniors on the team, all having state experience, the Lady Cardinals were able to do what no team has done in quite some time, bring home a win at state and a title.

Led by seniors Carissa Powell, Kori Fischer, Ashley Hohenstein, Sydney Hirsch and Natalie Akins the Cardinals were able to bring their dreams to reality but not without the help of some very talented underclassmen. Sophomores McKenna Sims, Marybeth Rasmussen, Taryn Christensen and Bricelyn Comstock all contributed to this amazing feat and all had major roles in hanging another banner in the mini-dome. 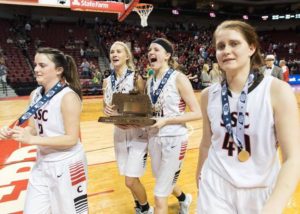 The opening game against Gretna was a crucial one and they knew it. They had to get the elephant off their back but knew it wasn’t going to be an easy one. After getting out to an early lead the first half Gretna was able to inch a little closer in the third quarter. It took a strong performance by Sr. Kori Fischer scoring 13 of her 16 points to edge Gretna out of the picture. SSC outscored the Dragons 22-14 and advanced with a 51-40 point win. Sophomore McKenna Sims scored 17 points.

The second game proved to be much like the first but a much closer ending. The Cardinals came out strong and cruised to an early lead but saw their opponent fight their way back outscoring the Cardinals by 10 in the second half. The Lady Cardinals had a 3 point lead with just seconds left on the clock but the Dukes had the ball and took a shot. It was good and worth 3 points. It was tied 36-36 and going into overtime. The Cardinals, despite the frustration of letting up a good lead, came out and dominated overtime allowing the Dukes to score only 2 points. They won 41-38 and advance to the state final. McKenna Sims scored 15 points.

The state final was here and so were the Cardinals. They started the game with an early lead but this time never looked back. It was back and forth but the Cardinals took the lead early never gave it up despite constant pressure to do so. Carissa Powell who wasn’t much of a scoring threat the first two games came out and showed her experience and scored 14 points and 10 rebounds. Kori Fischer also showed her experience and scored all 11 of her points in the second half. McKenna Sims added 11 to become the state tournament scoring leader and Marybeth Rasmussen came in off the bench for a very strong performance and a much needed burst of energy during the second half.

The Lady Cardinals won 48-44 and brought home their 12th state title in school history. With experience and leadership on the floor, depth on the bench, and a great coaching staff the Cardinals were able to win another championship.

“I would say it means more to me as a coach knowing more about the game and how much goes into preparing for something like this. I also feel like these girls are my own kids, and seeing them accomplish something they’ve worked so hard for gives me a sense of pride I’ve never felt before. Winning as a player is such an amazing experience as well, and I feel very lucky that I’ve now had the opportunity to do both.” 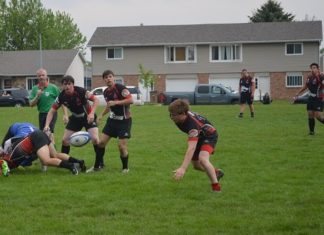 The Siouxland United Wolves Advanced To The Rugby Nebraska Playoffs

HometownShare Submissions - May 23, 2016
0
The Siouxland United Wolves advanced to the Rugby Nebraska playoffs with a 17-10 win over West Omaha Saturday morning at the Dible Soccer Complex. The...