If you read last weeks Stampede article and all the others then this one will probably sound very similar.

They won again, this time against the Omaha Stockmen 52-20.

The Sioux City Stampede are off to a 6-0 record and have dominated all of their opponents. They have outscored them by an average of seven touchdowns or just over 35 points per game. Not only is the offense putting up huge numbers but the defense preventing numbers as well. With both lines contributing like this it’s going to be very difficult for other teams to beat the Stampede and this weekend was another good example.

The Stampede were on the road again this weekend visiting the Omaha Stockmen. The Stockmen came into the game having just upset the Des Moines Blaze 19-14 at home and were looking to use their home field advantage again. The Stampede, however, had other plans.

Scott Manley completed 17 passes for 318 yards and 6 touchdowns connecting with 7 difference receivers while both Larry Taylor and TJ James contributing rushing yards. Taylor with 138 and James with 93, both scoring a touchdown.

Stampede receivers Bret Van Muyden had 7 receptions for 160 yards and 2 touchdowns and teammate Zac Kliment added 2 more touchdowns with both of his completions for a total of 54 yards. Ben Oberle and Nick Zant also added a touchdown each. Also getting in on the receiving yards was Hunter Casey with 21 yards on 3 receptions, TJ James with 8 yards on 1 reception, and Jake McDonald with 34 yards on 2 receptions.

Kicker Doug Lehman was 2-2 in field goals and on the defensive side Mike Trobaugh and Joshua Collins both had 2 interceptions for the Stampede.

The Sioux City Stampede have a bye this weekend and will host the Midwest Titans July 22nd at the South Sioux City High School Sports Complex. Kickoff is at 7pm.

Head out there and cheer on your Sioux City Stampede.

Become a writer for HometownShare and start sharing your own articles. Ask us how. 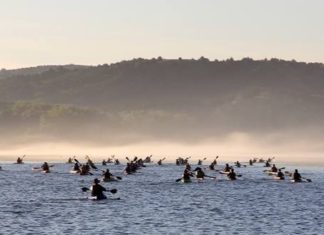 “For The Love Of The Game” Mitchell Betsworth

I Will Lighten Your Day