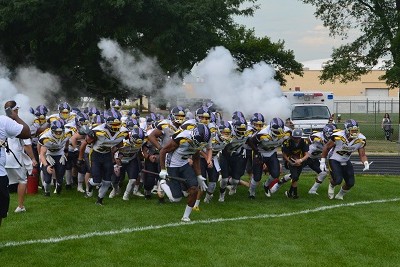 If you attended the Sioux City Stampede vs. the Northwest Iowa Bulldogs game last weekend then you saw one heck of a game.  Unlike the previous two meetings the game came down to the fourth quarter with both sides fighting it out in the final minutes.

The Stampede beat the Bulldogs previously 35-0 and 45-0 but the Bulldogs came out with some defensive adjustments and it really showed.  They forced three interceptions and limited the Stampede’s ground game dramatically compared to their last meeting when the Stampede rushed for 237 yards and passed for another 267.  The Bulldogs held them to 188 yards passing and 148 yards rushing. 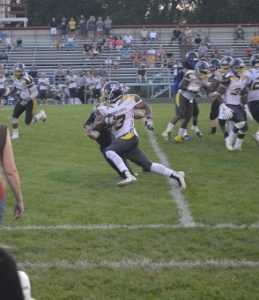 A 96 yard touchdown reception from Scott Manley to Lavon Wright in the first quarter helped their above statistic and helped wake up both teams.  After a couple three and outs for both squads the Stampede put themselves on the board after being deep in their own end zone.

The Bulldogs reacted with a touchdown of their own but it came from a 60 yard pick six later that quarter by Josh Hansen to keep the Bulldogs within 1 heading into the second quarter 7-6.  Hansen had two interceptions for a total of 100 yards.

The second quarter proved to be another challenge for both teams as they struggled to find their offense.  Both defenses stepped up and forced their opponents to make costly mistakes and limit the opposing offense.  The Bulldogs defense forced Manley to throw two more interceptions but they were not able to capitalize on them.  The Stampede did put 7 more on the board when T.J. James rushed for a 5 yard touchdown right before halftime to for a 14-6 lead.

You can imagine what kind of halftime speech was given to both teams as they were both in position to win and head to the championship game.  Both teams came out with the same stubborn defense but it was only the Stampede that scored in the third quarter with a 19 yard pass from Manley to Zac Kliment to head into the 4th quarter 21-6.

The 4th quarter proved to be the best quarter of the game and kept you on the edge of your seat.  Both teams were scrapping and clawing for the victory sacrificing everything they had for every yard.  It was back and forth, neither team giving up.  Then Nathan Leer rushed for a touchdown to put the Bulldogs within 9 points with just minutes left.  Their 2 point conversion was not successful and the Stampede held on from there for the 21-12 win.

This game was all about the defense with both teams putting up numbers that would shock most.  Accounting for over 120 total tackles between the two teams and 4 interceptions, one returned for a touchdown.  Corey Wortman of the Bulldogs had 6 solo tackles and assisted 4 others followed by teammates Michael Ripke who had 5 solo and 3 assisted and Todd Bottorff and Austin Buchholz who both had 2 solo and 6 assisted.  The Stampede’s Jason Warren had 2 solo and 5 assisted tackles helping out Marcel Moody who led the way with 7 solo tackles and 3 assisted.

If you missed this game then you truly missed a battle.  People always say it’s tough beating the same team three times in the same year and the Bulldogs proved that.

The Stampede are the only undefeated team in the Midwest Football Alliance at 9-0 and are heading into familiar territory this weekend as they face the Kansas City Bulldogs for the MFA championship held at Ralston High School in Omaha, NE.  The KC Bulldogs are 7-3 on the season and lost to the Stampede earlier this year 19-14.

The game will be broadcasted live on 620 KMNS starting at 6:30pm August 6th. 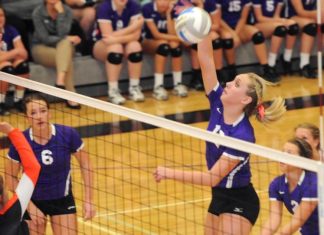 HometownShare Submissions - October 9, 2015
0
The Dakota Valley volleyball team had a very impressive 29-5 season last year where they placed at state.  They lost in the second round...

The Lady Cardinals vs. The Lady Titans