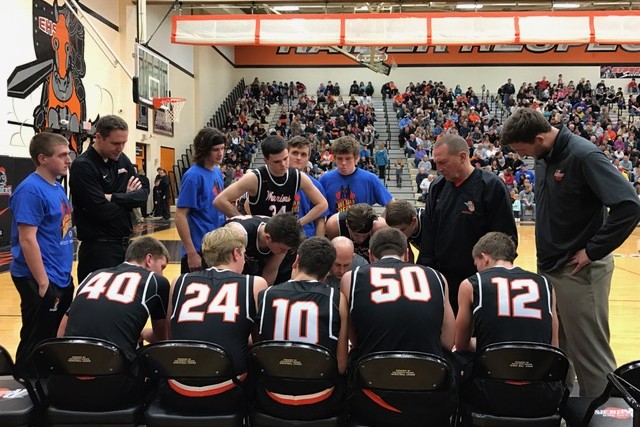 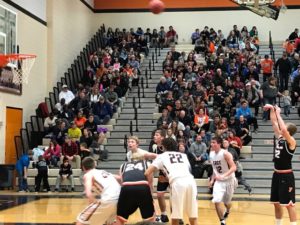 SB-L traveled to Sioux City East High School on Friday (1/27) to take on the Black Raiders in a rematch. From the opening tip, the crowd was loud and the guys were physical.

East took the first possession but was not able to come up with points. SB-L wasn’t quick to score either. They finished down by 5 going into the quarter break.

Keegan Savary tried to keep up with a three-pointer for the Warriors. Chris Kroll also swished a three, and Connor Groves hit one with twenty seconds left in the half. But EHS maintained a lead going into the locker room.

The Warriors hustled to stay within striking distance of the Raiders throughout the second half. Wright had a three-point play with the and-one late in the third quarter, but SB-L was still down by 11.

Luckily the Warriors are never ones to shy away from a challenge.

Groves, Kroll, and Savary started the final minutes with back-to-back-to-back threes. In just 8 minutes SB-L put up 31 points, outscoring their opponent by 10 that quarter.

Although the guys put everything they had into the game, they came up just short when the final buzzer sounded. Despite the outcome, the team showed tremendous grit as they worked their way from behind to make it a one-point finish.

SB-L will take on non-conference opponent Denison-Schleswig on Tuesday night at home. Sioux City North will also play at SB-L next Friday (2/3).

HometownShare Submissions - May 16, 2017
2
The Siouxland United Wolves took 3rd in the NYRA Championship tournament held Sunday in Omaha. The Wolves were were 2-0 in the tournament going into...