The Warrior boys handed Hinton their first loss of the season last Monday night (Dec. 15). SB-L played a solid game, but the Blackhawks fought hard as well, making for an unpredictable night full of highs and lows.

Although the 1st quarter may have started more slowly than the Warriors would have liked, they did not commit any fouls, setting the standard for a fairly clean game overall. Jackson Wright started the team in the right direction when he put it in for 2 in the final seconds of the quarter to give SB-L a 4-point lead. Wright had an impressive 16 total points and 5 rebounds for the night.

The Warriors displayed their amazing teamwork in the 2nd quarter when Andrew Christensen fought hard for one of his 7 rebounds of the game, then passed it to Jacob Shultz who assisted Chris Kroll with the three. Kroll quickly scored another 3-pointer, contributing to his 24 total points as the leading scorer for SB-L.

Coming out strong in the second half, Kroll swished yet another 3-pointer, and Savary sunk a three as well. Savary led the team in rebounds with 8 throughout the game. To sweeten the deal, Kroll later stole the Blackhawks’ ball twice in a row, both times taking it for 2 points. He hit his fourth three of the night to close out the third quarter, but Hinton was also able to sneak in a 3-pointer before the buzzer.

Heading into the final 8 minutes, Coach Vander Schaaf told his team, “This is the time to take control,” and take control they did. Shultz sealed the deal with two 3-point plays in a row, one a three pointer and the other a fouled shot plus the free throw. Shultz helped out his team with 6 rebounds and 12 points throughout the game, making him the third Warrior to score double digits.

With their second consecutive win, SB-L advances to 3-4 for the season, and they’ll just keep getting better. 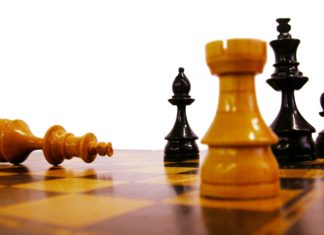 HometownShare Submissions - January 11, 2018
0
My favorite board game is chess. I play it with my dad every weekend and sometimes beat him. We have a really nice board...