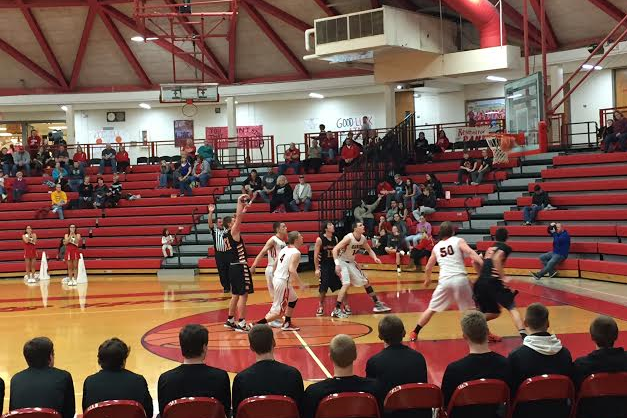 “That was a weird game.” SB-L head coach Adam Vander Schaaf couldn’t have summed it up better.

Last Thursday the Warriors traveled across the river to round out their regular season with a one-of-a-kind game against the South Sioux City Cardinals.

SB-L grabbed the opening tip to set up Chris Kroll with a 3-pointer right of the bat. The pace picked up quickly but neither team was able to score in the next few minutes until SSC hit a three of their own.

After an “and 1” from top Warrior rebounder Andrew Christensen, South Sioux quickly sank two more 3-pointers to put Sergeant Bluff down by two.

The first four minutes of the second quarter were scoreless until SB-L’s leading scorer Keegan Savary drained a three and Jacob Shultz followed with another 3-pointer.

Savary had 22 points in addition to 6 rebounds. Kroll and Shultz were next on the charts for the Warriors with 12 points each. Shultz also had 9 boards.

With a halftime score of 19 all, Savary swished a three to quickly gain the Sergeant Bluff lead. Later in the quarter, Savary assisted Kroll for a smooth two points and then took one the length of the floor himself to help the Warriors pull ahead even more.

The Cardinals climbed back from a heavy score deficit with three long 3-pointers in the final minutes but SB-L stayed sharp to end up on top, 58-53.

With scoring droughts, shaky tempos, odd foul calls, and sudden showers of threes, this game had no common theme besides a Warrior victory.

The Mustangs Softball Team Is Heading To The World Series!

HometownShare Submissions - May 22, 2016
0
For the second straight year the NAIA Softball World Series will be played here in Siouxland and this year the Mustangs of Morningside College...

Jackson Wright Goes For The Layup