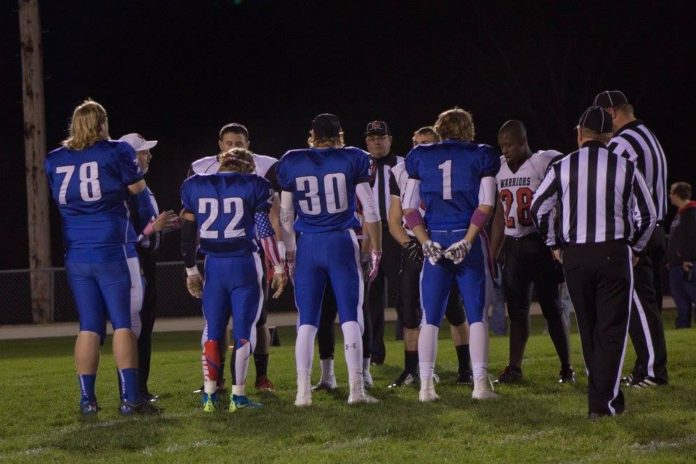 As the seniors from Twin Cedars took the field for their final regular season game, they were well aware of what was at stake.

With a district title, a number one seed in the playoffs, and an undefeated regular season on the line Friday night, Twin Cedars pulled away late in the fourth quarter to top the Warriors of HLV by a score of 32-14.

Despite outscoring their opponents by a whopping 330 points entering the night, Coach Aaron Allspach knew his hands were full with the Warriors coming to town. They entered the night tied with the Sabers atop the district standings. Both teams had already locked themselves into the playoffs, with the winner of Friday’s matchup claiming the district title.

From the opening kickoff, the intensity and physicality from both sides was made apparent. The Sabers received the opening kickoff, looking to score early and often as they have done so many times this season. However, that was not the case Friday night as the HLV defense proved to be one of the best units the Sabers have faced all season.

After both teams traded punts to start the game, the Warriors stole the early momentum via their special teams. With the Sabers forced to punt on their second drive, Trace Embray had his punt blocked, and HLV took over on the Sabers’ side of the field. The Warriors would capitalize on the excellent field position, as running back Wyatt Kaplan reached the end zone on 4th and goal to make the score 6-0.

The Sabers would quickly respond on the ensuing drive, as Embray took a reverse 46 yards to tie the game at 6-6.

HLV would start their next offensive series deep in their own territory. A bad snap sailed past quarterback Jacob Coats as the Warriors fell on the ball in their own end zone, resulting in a safety. Twin Cedars held a slim 8-6 lead entering the second quarter.

The Sabers’ offense continued its success as Embray capped off a nice drive with his second rushing touchdown of the night to give Twin Cedars a 14-6 lead. HLV drove into the red zone on their ensuing possession, but James Elliot picked off quarterback Jacob Coats to halt the Warriors’ drive. The Saber defense would intercept Coats two more times by the end of the night.

Neither team would score again before halftime as both sides traded punts. Penalties and poor blocking by the offensive line plagued the Saber offense throughout the night. Defensively, coach Cam Parker had the Sabers dialed in on HLV’s ground attack and exposed their weak passing game. With neither team moving the ball effectively, the score remained 14-6 at halftime.

Starting from their own one yard line, HLV once again drove down the field and into the red zone to open the second half. This time it was Embray picking off Coats, as the Sabers forced their second turnover of the ballgame and preserved the eight point lead.

Similar to the second quarter, both defenses played aggressive throughout the third quarter as neither offense could sustain drives. Quarterback Nick Haselhuhn was under duress almost every time he dropped back to pass, as the HLV defensive line did a great job of disrupting the Sabers’ passing attack. The offense could not find its rhythm, as the Warriors’ defense continued to force the Sabers to punt. Neither team found the end zone, as the score remained 14-6 entering the final quarter.

Jake Crozier swung the momentum in favor of the Sabers as he wrapped up Coats for a sack to open up the fourth quarter. After the Warriors punted, the Saber offense trotted out in search of their first points since early in the second quarter. As the Sabers began their offensive series, Embray came to the sidelines with an apparent leg cramp. Junior Ben Rowley checked into the game, and made the most of his opportunity. Haselhuhn threw a screen pass to Rowley on the ensuing play, and followed his blockers to pay dirt to give the Sabers their first points of the second half. Entering the game, Rowley had just two receiving yards all season. His 56 yard score extended the lead to 20-6.

The Rowley touchdown opened the floodgates, as the Sabers added two more scores in the fourth quarter. After a failed HLV fake punt, Haselhuhn connected with his favorite target Embray for an 18 yard score to move the lead to 26-6.

Trying to crawl back into the ballgame, Coats threw his third interception of the night, this time to linebacker Jake Knox. The interception set up Embray for his third rushing touchdown of the night, which would prove to be the fatal blow in the contest. HLV would add a meaningless touchdown late to make the final score 32-14.

Haselhuhn finished the night with 141 yards through the air and two touchdowns. Dakota Pinegar, who entered the night averaging over 100 rushing yards per game, was held to just 36 yards on the ground. Embray tallied 143 total yards of offense and scored four times. Defensively, Pinegar led the team with 12 tackles. Senior Jake Crozier added 8.5 tackles and a sack.

Twin Cedars finishes the season 9-0 and 7-0 in district play. This is the first district title for the Sabers since 2004. The Sabers finish the regular season averaging the fourth most points in the entire 8-Man class and are currently ranked fourth by The Des Moines Register. Twin Cedars enters the playoffs as one of just four undefeated teams in the 8-Man class.

Twin Cedars (9-0) hosts the Iowa Valley Tigers (7-2) next Friday, October 28 in the first round of the 8-Man playoffs. Kickoff is scheduled for 7 p.m. 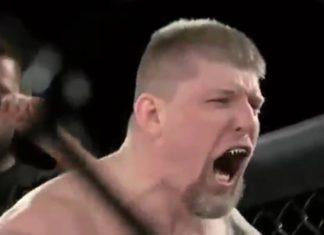 HometownShare Submissions - April 14, 2016
0
This past weekend was a big deal for Siouxland MMA and it all happened out at the WinnaVegas Casino Resort.  There were 10 bouts...