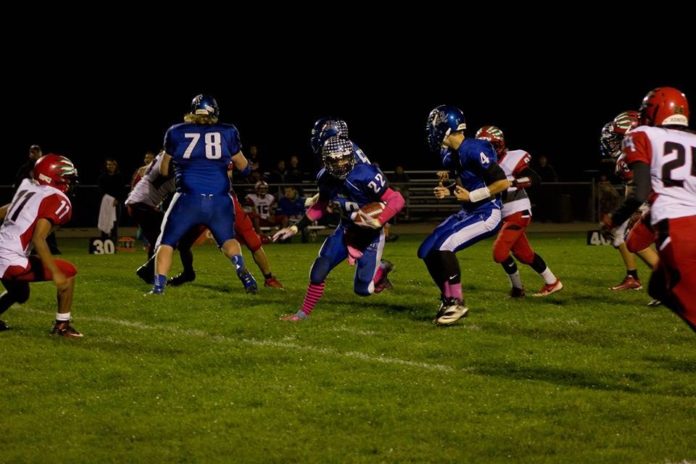 From the opening whistle, it was all blue and white.

Last season’s fourth quarter collapse against the Warriors was avenged Friday night as the Sabers tallied the first 64 points in the contest, cruising to a 64-20 blowout win over district foe Meskwaki. The win moved the Sabers up a spot in The Des Moines Register rankings to number six in the 8-Man class.

For the fifth time in just seven weeks, the Sabers returned the opening kickoff for a touchdown. Trace Embray, who already had 3 kickoff returns for touchdowns entering the night, outran Meskwaki’s coverage team to put Twin Cedars up 8-0 early on.

That was only the beginning of the Saber onslaught.

After the Saber ‘D’ forced a three and out, the offense, led by junior quarterback Nick Haselhuhn, took the field for the first time. Jake Knox polished off an impressive drive with an eight yard run to extend the lead to 16-0.

With Meskwaki driving in Saber territory, James Elliot picked off a pass at his own 18 yard line. On the very next play Dakota Pinegar scored his 17th rushing touchdown of the season as he rumbled in from 62 yards out to make the score 22-0.

With the Warriors still in search of their first points, Embray picked off his fifth pass of the year and raced 35 yards for six more Saber points. Although the top receiver for the Sabers was held to just one catch on the night, Embray still managed to find the end zone twice and also had five tackles on the defensive side.

On their ensuing drive the Warriors were forced to punt for the second time. Jake Crozier flew through the Meskwaki offensive line to block the kick, and the Sabers fell on the ball at the Warrior one yard line. Crozier also had six tackles on the night to go along with his blocked kick. A play later Pinegar found the endzone for his second touchdown of the night, extending the lead to 34-0.

As the first quarter wound to an end, a promising Meskwaki drive came to a halt when running back Keahna DeMarce coughed up the football. The Sabers took over at their own 35 yard line, where Haselhuhn connected with Knox for his first passing touchdown of the night. The first quarter came to a close with the Sabers holding a commanding lead, 42-0.

In the second quarter, the Sabers tacked on 22 more points before halftime. Knox found the endzone when he returned a punt 60 yards, his second punt return for a touchdown on the season. Later in the quarter, Pinegar scampered in from 22 yards for his third rushing touchdown of the night. Embray stopped the ensuing Mohawk drive when he picked off quarterback Jarius Bear in the red zone. Hoping for the last possession of the half, the Saber offense slowly drove down the field. With time winding down, Coach Aaron Allspach drew up a beautiful play to close out the first half. Haselhuhn faked a screen to his right side, and found the tight end Knox wide open in the end zone. Knox’s fourth touchdown of the night gave the blue and white a 64-0 halftime lead.

With continuous clock in effect, the second half quickly flew by. For the Twin Cedars starters, their night was done as the underclassmen received valuable experience at the varsity level. The Sabers were held scoreless in the second half, while Meskwaki found the end zone three times. Jarius Bear was the lone bright spot for the Warriors as he had touchdown runs of 64 and 74 yards. Keahna DeMarce also added a touchdown run for the Warriors, but these scores were insignificant as the Sabers rolled to a 64-20 win.

Haselhuhn finished the night 3-3 through the air with 81 yards and a couple of scores. The ground attack was led by Pinegar, who had 142 rushing yards and three scores. Defensively, Knox and Pinegar each had 6.5 tackles on the night.

Next week the Sabers travel to Seymour to face the 1-6 Warriors. Kickoff is scheduled for 7 p.m. 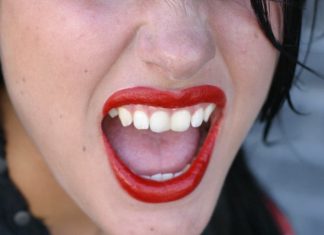