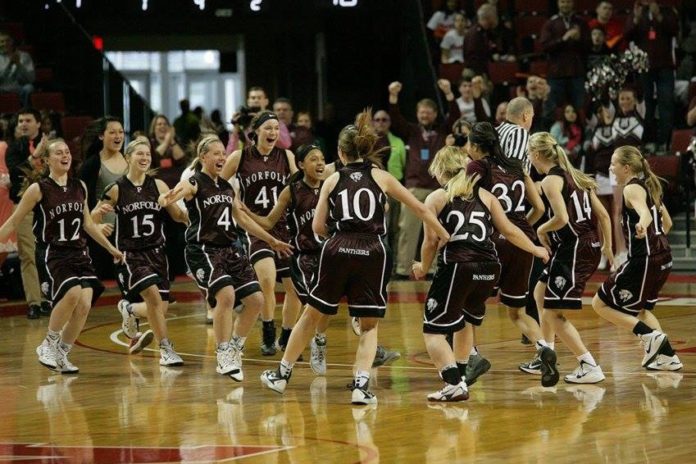 Norfolk girls’ basketball team didn’t look like a contender the entire year.  In fact, no one expected them to win at districts.  They had a 6-6 record midway through the season and a 7-6 district record but that didn’t stop them from believing in their own Cinderella story.  Going into districts they were most definitely going to have to win to make it to state with a 12-12 record and that’s just what they did.  In the opening round they beat second seed Papillion LaVista.  In the finals they beat Omaha North, who knocked out the top seed Milliard West, 30-23.

On to state is what you heard but not to be confused with the Norfolk boys team who are currently undefeated and top ranked in the state.  This chant was for the girls and the mountain got higher as they drew #1 ranked Omaha Benson in the first round.  Omaha Benson had a 45 game win streak going into state and were expected to win.  The odds were against Norfolk but just like in districts they stuck together and played the best they could and came out on top in a convincing 46-37 win.  Their next opponent, #6 Bellevue West, had just knocked out a strong South Sioux City team 48-37 and was on a roll. Norfolk knew they had to play another strong game with few turnovers to make it to the finals and that’s what they did beating them 36-23.

State finals here we come!!!  However, the championship game did not go as planned.  Omaha Westside’s defense proved to be too much for Norfolk.  Creating 19 turnovers that resulted in 15 points for the Warriors.  They also prevented, Senior and USD commit, Jaycee Bradley from getting into any rhythm in her shooting and finished 3-13.  She finished with 17 points and almost had a double double with 9 rebounds.  Teammates Taleah Williams and Jenna Jochum combined for 19 points to help out but despite their efforts it wasn’t enough.  The Lady Panthers lost 53-40.  They finished the season 15-13 and are the first Norfolk girls’ team to go to the finals and the first team in the state to go to the finals having lost more than 9 games.

It certainly sounded like a Cinderella story but this story didn’t end that way.  Of course making it to the state finals was an incredible achievement that, besides the players and coaching staff, no one thought they could do.  A .500 team winning districts?  Going to state?  Beating the top ranked team and making it to the finals?  This only happens in movies right?  Well the imagination in Hollywood was once inspiration in real life.  Maybe, someday, this story will be better written and turned into something more.  Great season Norfolk!!!

HometownShare Submissions - October 30, 2017
0
The Outlaws evened their record for the weekend at 1-1 as they beat the Great Plains Bison in Winnebago 96-76 after falling to Team...