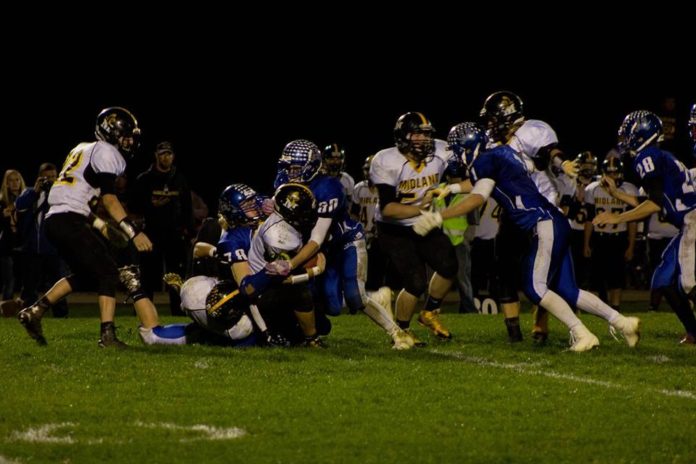 That’s how close the Sabers came Friday night to bringing their dreams of playing in the UNI-Dome to fruition. Leading by two points entering the fourth quarter, the Sabers could taste the state semi-finals.

However, Midland had other ideas. The Eagles dominated the 4th quarter, as they erupted for three touchdowns and forced four turnovers. Midland outscored Twin Cedars 22-0 in the final period, ending the Sabers’ season by the score of 42-22.

The Eagles entered the game as the District 4 champions and 8-2 on the season. Led by senior quarterback Alex Martens, Midland averaged over 58 points per game and led the state in passing yards. The Eagles thumped HLV by the score of 80-24 in their first round playoff game.

It was a beautiful autumn night for football as the seniors for Twin Cedars jogged onto their home field for the final time in their career. They fully expected a dogfight, as Midland brought a very talented squad to the field Friday night.

The Sabers received the opening kickoff, hoping to strike first. However, Midland forced a quick punt after quarterback Nick Haselhuhn was wrapped up for a sack. Martens led the dynamic Eagles’ offense onto the field. He drove the Eagles downfield, connecting with star receiver Connor Harms on a 25-yard touchdown pass to put Midland on the scoreboard first, 6-0.

After both teams traded punts, the Twin Cedars offense finally got rolling as they moved the ball onto the Midland side of the field. The promising drive came to a halt when Jake Knox coughed up the football, the first of six turnovers on the night for the Saber offense.

For the second consecutive week, the Sabers got on the scoreboard via a safety. A bad snap sent the Eagles’ punter back to his own end zone, as he was forced to dive on the football, resulting in a safety. With the momentum suddenly in favor of the blue and white, Trace Embray gave the Sabers the 8-6 lead when he returned the ensuing kickoff for a touchdown. The electrifying return brought the fans to their feet, as one of the largest crowds in recent history roared with excitement.

After Midland countered with a score to take a 14-8 lead, James Elliot made a huge defensive play to start the second quarter. Elliot picked off Martens, giving the offense a chance to retake the lead. Dakota Pinegar rumbled into the end zone from eight yards out, putting Twin Cedars back on top, 16-14.

Both teams would trade scores once more before halftime. Pinegar scored his second touchdown of the night, this time on a 56 yard catch from Haselhuhn. Dawson Paulsen scored from six yards out for the Eagles, as the score was 22-20 late in the second quarter. The Sabers had a chance to widen the lead before halftime, but Haselhuhn threw a costly interception just as the offense was nearing the end zone. That turnover seemed to take the wind out of the offense’s sails, as they would be held scoreless the remainder of the game.

Neither team could muster any offense in the third quarter, as both defenses played well. The Sabers’ offense could not get into a rhythm, as penalties and poor blocking prevented them from moving the ball effectively. Both teams would trade punts, and Twin Cedars took a slim two point lead into the final quarter.

Midland grabbed the lead and momentum early in the fourth quarter when Austin Smith scored from 19 yards out, making the score 26-22. The wheels fell off for the Sabers, as the offense couldn’t move the ball as they had done so easily all season long. Defensively, a unit that had given up only 20 points through three quarters gave up 22 points in the fourth quarter alone. The Sabers’ next two offensive possessions ended in Haselhuhn interceptions. The Eagles capitalized on both turnovers, taking a commanding 42-22 lead and essentially putting the game out of reach.

Suddenly down 20 points, Twin Cedars still had some fight left in them. Senior Jake Crozier blocked a punt and bulldozed his way down to the Eagles’ 14 yard line. Unfortunately, the nightmare fourth quarter continued as Haselhuhn was picked off once again to end the scoring threat. The final play of the game was a microcosm of the quarter, as Haselhuhn threw another interception, his 5th pick of the night. Midland forced four turnovers in the final quarter, escaping with a 42-22 victory and ending the Sabers’ season.

Twin Cedars finishes the season at 10-1 overall. Despite the disappointing finish, there are still several positives to take away from this historic season. The Sabers won their first district title since 2004, and won their first playoff game since 2013. Twin Cedars peaked in The Des Moines Register rankings at fourth in the 8-Man class. Also, the 10-0 start was the best start in school history. The senior class will be sorely missed, as Coach Allspach loses 10 graduating seniors. 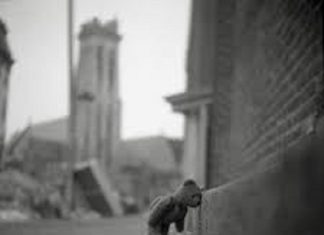