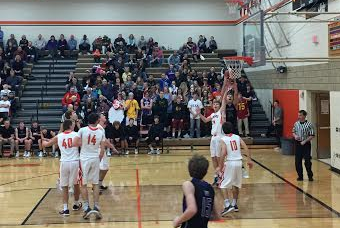 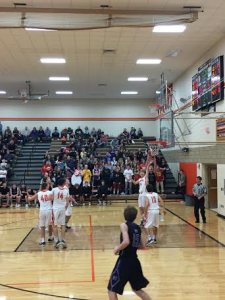 Thriller. Nail-biter. SB-L’s game against the unbeaten Dakota Valley Panthers. All terms are synonymous.
Tuesday’s game here in Sergeant Bluff (Jan. 5) was not one to miss. The packed gym saw plenty of action from both teams throughout the night, starting with a 3-pointer from Jacob Shultz. That was just the beginning of Shultz’s 20-point game. He led the Warriors in both scoring and rebounds (9) for the night.

The Panthers were prepared for competition though, as they responded with two threes and another at the buzzer to pull ahead going into the second quarter. SB-L did their best to stay in the game but headed into the locker room with a 13-point deficit.

Fired up, Shultz came out with a steal for 2. Minutes later, Chris Kroll also stole the ball and put it in for 2 but not without a behind-the-back dribble to keep away from Dakota Valley defenders. That was just one of Kroll’s 6 steals throughout the game in addition to his 17 points.

The first and second leading scorers helped the Warriors battle back, each swishing an “and one” before the quarter was up, which closed the scoring gap to just 4 points. Kroll’s fouled shot was assisted by a steal from Keegan Savary, who had a notable 9 assists for the night.

The fourth quarter was quite possibly more action-packed than the rest of the game combined. Shultz had another three, another steal, and another 2+1, but it wasn’t enough to take down the undefeated Panthers. Although SB-L gave it all they had, Dakota Valley managed to take the win by just 3 points. Nonetheless, perseverance, hard work and determination were proved to be the defining qualities of a Warrior. 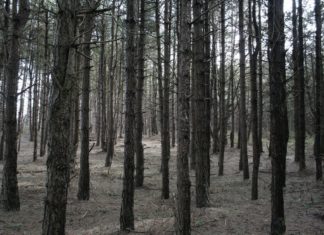