Friday the 13th proved not to be bad luck for the SB-L boys’ varsity basketball team against Council Bluffs Thomas Jefferson. Quite the opposite, actually, it was a lucky game to remember for lone senior and team captain, Isaac Croston, on his senior night. Appropriately, he scored the first bucket for the Warriors. Croston finished the game as the third leading scorer with 12 points.

After SB-L got rolling, Connor Prescott was the first of five different Sgt. Bluff boys to swish 3-pointers that game. The Warriors held CBTJ scoreless to 15 points before the Jackets retaliated with back-to-back threes. 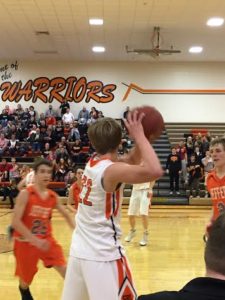 The second quarter had Keegan Savary shooting a three, Jackson Wright playing some mean defense, Chris Kroll stealing it left and right, and Jacob Shultz making a shot despite being tackled. Savary lead SB-L in both points and rebounds this game, putting up 15 and pulling down 8. Just behind him was Wright with 14 points plus 6 boards, along with Andrew Christensen who had 7 rebounds. Kroll and Shultz also helped out, scoring 7 and 6 points, respectively, in addition to 3 steals apiece.

These fantastic plays and others put the Warriors up by more than 35 after halftime, enacting the continuous-clock mercy rule. Even on shortened time, Croston managed to hit his first three of the season, a personal victory for sure.

Adam Kascht and Kroll also drained 3-pointers at some point during the night. In fact, all eleven members of the team ended up scoring for SB-L throughout the game, another first for the season.

This impressive feat just goes to show these guys’ incredible dedication. They’ve now improved to 11-9 and have one game left on Thursday, February 19 at home versus South Sioux City.

HometownShare Submissions - May 24, 2017
5
22 years ago I was born. My dad tells me all the time about how beautiful I was and the full head of hair...

The Sioux City Stampede Did It